As part of our project "Revealing St Alban's Hidden Heritage", supported by a major grant from the National Lottery Heritage Fund, made possible by money raised by players of The National Lottery, we have provided an improved accessible step-free entrance lobby to the church and church hall suitable for both wheelchair users and ambulant visitors, completed in 2021. Interpretive material on internal and external information panels has been delayed due to the Covid-19 pandemic.

The church of St Alban the Martyr is built on land rising from west to east and from south to north, so the floor at the west end of the nave is raised well above the external ground level. The entrance through the west porch (or narthex) is up a flight of steps from the street. Although the south porch in the base of the tower opens onto street level, there are internal steps to reach the level of the nave. 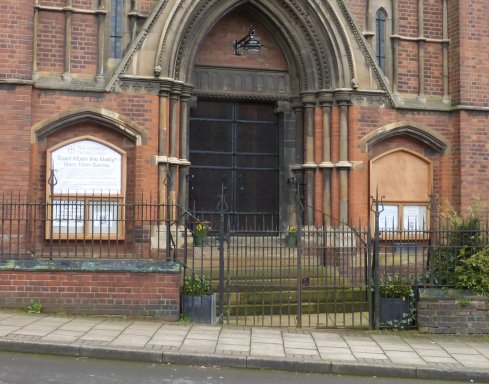 In 1997 a step outside the ‘cloister’ side door beside the north transept was eliminated to provide a wheelchair entry and an adapted toilet was provided for wheelchair users. However, this door did not provide 'equal' access because although regularly used as an entrance by the choir, servers and many of the regular congregation, it was not an obvious public entry route for visitors, being situated at the end of a path from a side gate and obscured from the street by a hedge.

The path to the step-free cloister entry in December 2021

Why the Cloister Entrance?

We would have liked to provide step-free access through the west porch, the prominent "main entrance"  of the church, but this did not prove feasible. There is insufficient space in front of the west doors to replace the steps with a ramp of acceptable width and pitch. There is also a step up from the porch to the nave floor with insufficient room to provide a ramp. It would have been possible to create a new doorway into the north end of the porch with a sloping access path as an alternative to the steps to the west doors and to raise the floor at the north end of the porch to the level of the nave. However, this would have required significant alterations to the historic fabric of our Grade II* listed Victorian Gothic building and it became clear that regulatory consent for any alteration to the historic western façade would be strongly opposed.

We therefore developed an alternative scheme to provide a welcoming lobby as an entrance to the church for wheelchair users and ambulant visitors alike by modifying the modern 'cloister' annex. This was added to the north side of the church in 1984 at the same time as the church hall, primarily as an entrance to the vestries and the new hall. It already provided a step-free access route to the church and was in fact used routinely by many of the general congregation as well as the choir. However, it was not fully compliant for wheelchair use, was almost invisible from the street due to the high privet hedge and an overgrown ornamental cherry tree and it was unsuitable for general use during events in the church because it provided an unseen access to the vestries and hall area and so could not be left unlocked for security reasons.

To make this entrance suitable for general use as a principal entry to the church we decided to modify the modern structure to create a larger lobby with separately controllable access through a glazed door in a historic doorway into the north transept of the church and through a new door to the vestries and hall area. Externally we planned a wider glazed outer door with an information panel beside it, a new security fence to prevent access to the rear of the hall when the street gates are open and new lighting for the path from the gates to this entrance. Removal of an overgrown ornamental tree and part of a privet hedge would make this 'cloister' entrance much more visible from the street.

Removal of the tree and part of the hedge gwould give a clear view of the improved 'cloister' entrance.

The work to modify the entrance was expected to start in March 2020 and be completed in June, with the lighting for the path installed in September. However, work on the site was suspended from the 24th of March to the 1st of June 2020 due the the Covid-19 epidemic; when work resumed the immediate priority was to progress the work on the parallel project to renew of the church roof, which was at risk of being affected by adverse weather later in the year, so work on the cloister entrance did not begin until July 2020 and the last snagging issues were not completed until September 2021.

You can follow the progress of this work starting here: http://www.saintalban.co.uk/restoration/stepfreeaccess/januarytojuly/