After a nine week pause due to precautions to slow the spread of Covid-19, work restarted on 1st June 2020 and by 3rd June stripping the tiles form the south aisle was complete, ready for inspection of the roof by the architect: 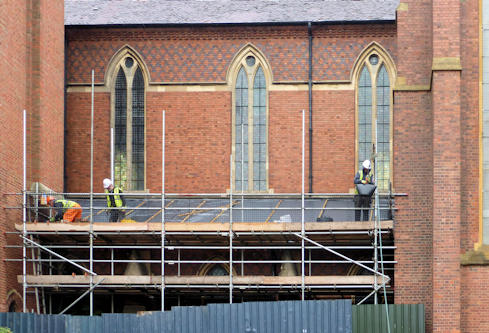 The south aisle stripped of tiles and sheeted 3 June 2020

Meanwhile the scaffolding at the west end was growing in height: 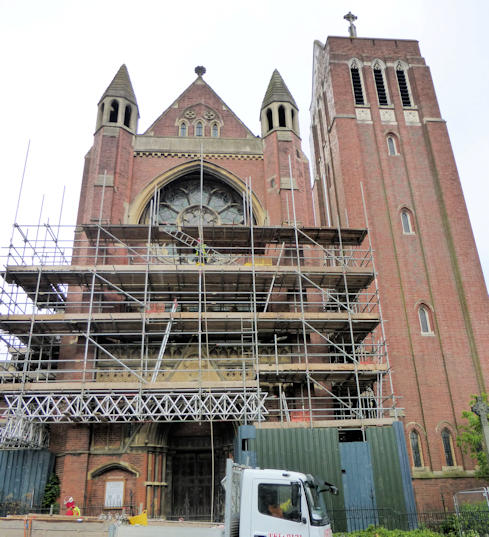 
And the contractors had started to stip the tiles from the north aisle roof: 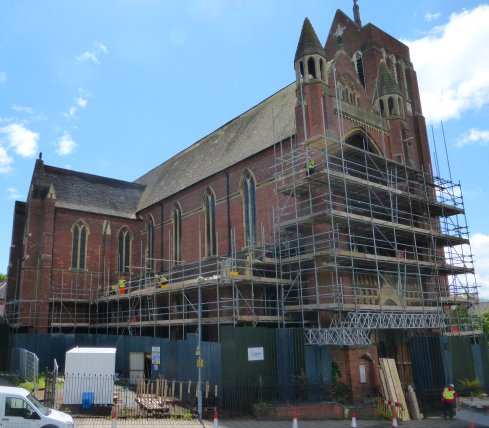 Stripping tiles on the north aisle; another deck at the west end 5 June 2020 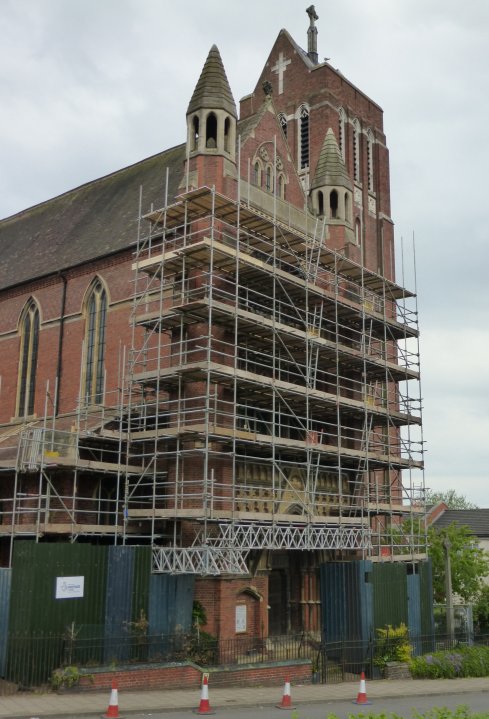 
The following pictures are courtesy  our architect from of Hook Mason Ltd., who examined the aisle roofs and the west façade from the scaffolding on the 15th of June. 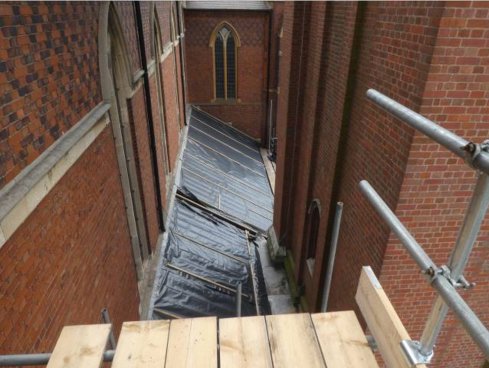 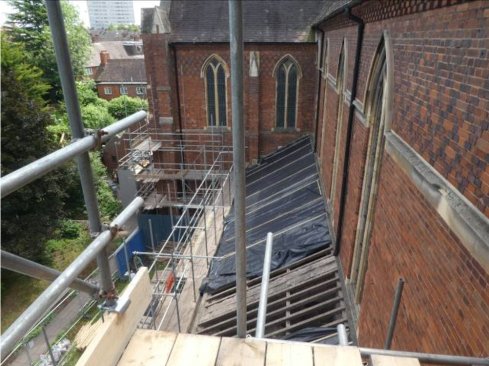 Inspection from the roof voids over the aisles had already shown that most of the roof timbers were sound. Stripping the roofs revealed only two small areas of decayed timbers needing replacement. One was on the north aisle, where a rafter laid in a recess in the top of a cross wall within the roof space had rotted. This is directly below the spout of a downpipe the carries half of the rainwater from the north side of the nave roof, so even a slight defect in the roof here will have led to repeated soaking, while because the rafter was encased in the wall there will have been minimal air circulation to dry it out. 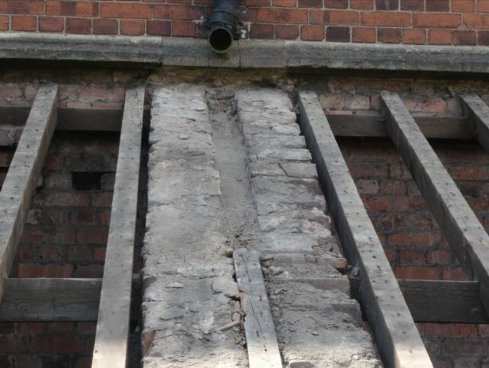 The other decayed timber was at the west end of the South Aisle, where a rafter and tilting fillet had rotted. 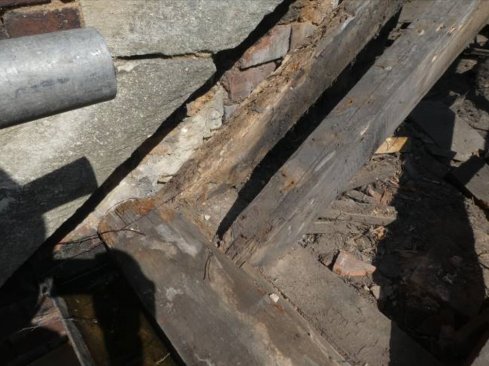 The small amount of carpentry repairs needed was within what had been allowed for in the priced specifications.

However, the rose window was found to need additional work, including the replacement of several damaged pieces of glass, repainting of ironwork and clearance of pigeon guano. 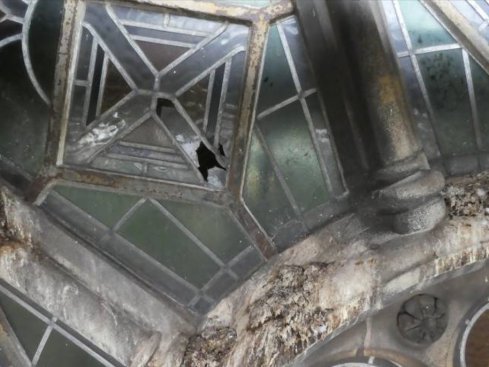 
There is also a need for some extra pointing, including at the bottom of the wall of the external balcony above the rose window that gives access to the interior of the Nave roof. 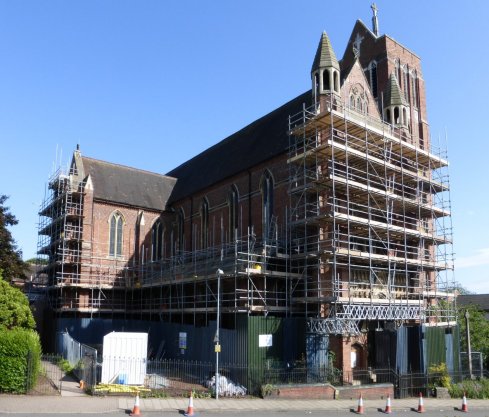 
By the end of the week the scaffolding had reached the roof along the north side of the nave. 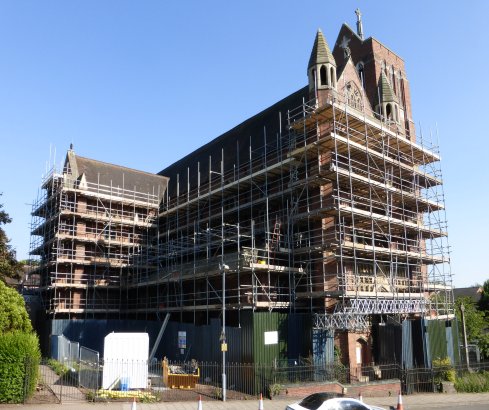 
On June the 30th the roof of the North Transept we being stripped of tiles and battens. 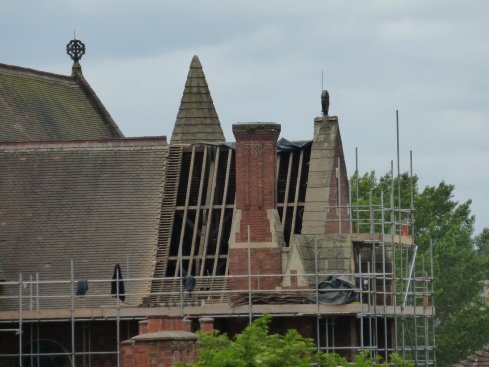 Read about the progress of the work during July here: http://www.saintalban.co.uk/restoration/roofrenewal2/july/.

Or return to March to May here: http://www.saintalban.co.uk/restoration/roofrenewal2/marchtomay/

Thanks to The National Lottery Heritage Fund more