The present church of St Alban the Martyr on the corner of Conybere Street and Stanhope Street opened on the 3rd of May 1881 — but it was a long-standing custom in our parish to continue to celebrate the anniversary of the opening of the first temporary mission church of St Alban on Leopold Street in 1865 on Holy Cross Day — 14th September — as our Dedication Festival. This year we have revived the custom with a Mass in the octave of Holy Cross Day to celebrate both the start of the mission district that became our parish and the renewal of the roof of our church and provision of improved step-free access.

(Today we were without an organist at short notice, so the singing was unexpectedly a capella.)

No video due to holidays

No recordings for 1st August and 25th July.

We apologise for some problems with the sound in this video due to technical problems during recording.

No videos for 27th June and 4th July as Fr Gerry was ill.

No recording this week due to technical problems.

Thursday 13th May — Feast of the Ascension

Fr Gerry was on holiday, and we regret that we were unable to record this service. 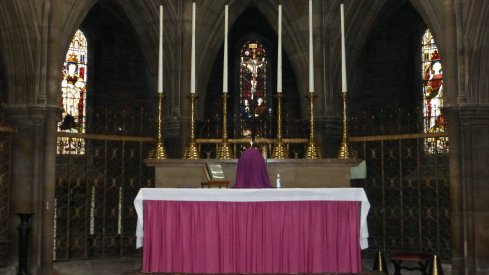 We regret that recording the Mass failed today.

Sunday 10th January — The Baptism of the Lord