The Bunce Altarpiece or Reredos

St Patrick's Chapel is home to a magnificent Arts and Crafts altarpiece or reredos consisting of five panels painted in egg tempera by Kate Bunce set in a copper tryptich frame hand-beaten by her sister Myra, both Birmingham artists.

The central panel, depicting the infant Jesus cradled by the wings of angels before the kneeling figure of Mary, is flanked by two panels of adoring angels, while the outer panels depict St Patrick and St Alban. The central three panels include images of many different birds. 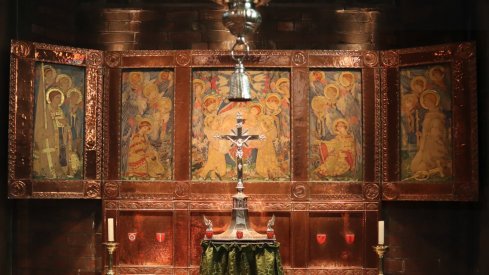 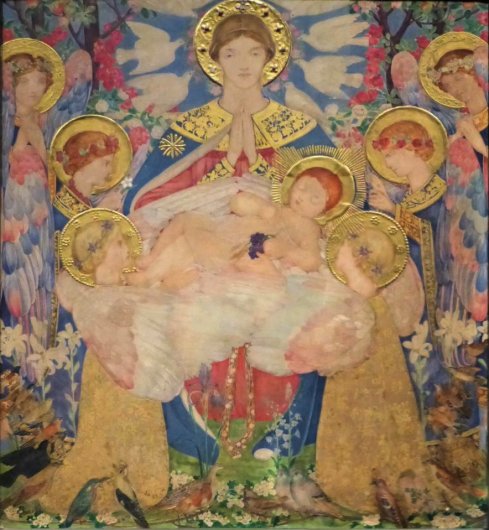 The Holy Child is carried in a wing cradle, formed by the wings of two kneeling Angels, sleeping. He holds in one hand the corn and grapes, which represent the Bread and the Wine in the Blessed Sacrament. His Head is surrounded by the nimbus with rays and cross, symbolical of Divinity. The Madonna kneels behind the Child, wearing her traditional colours, a blue mantle and red gown. On the cloak is the star that typifies her, called by several names — Stella non erratica—The fixed star; Stella matutina—The morning star; Stella maris—The star of the sea.On the collar of her cloak is the wild flower, “Our Lady's Mantle”; on the sleeves the wild strawberry, a fruit dedicated to the Blessed Virgin; on the girdle the wild dodder, “Our Lady's Garters." (Our Heavenly Mother is supposed to have once let this girdle down from Heaven to convince a doubting Saint). The traditional colour of Our Lady's hair is a pale brown, her eyes grey—set far apart, her complexion a clear pallor with an expression of great calm and peace.

The Holy Virgin is portrayed with head covered by a light veil, and surrounded by the nimbus (halo). The Doves round the head represent the seven gifts of the Holy Spirit.

The Virgin is often represented kneeling inside her garden (hortus inclusus), which is surrounded by a paling, as in the picture.

The Apple is a fruit dedicated to her; the red and white Roses are her flowers; the Lily being her special flower, while the Iris is dedicated to her, and the Veronica is the flower of faith.

The angels just behind the kneeling angels are holding — (right) Christmas Rose (left) Star of Bethlehem — emblems dedicated to the Child.

The hovering Angels wear May crowns, the hawthorn being supposed one of the trees from which the crown of thorns was made.

The praising birds in flight, from below upwards are — Blackbird; Willow Warblers; Wren; Chaffinch; Lark.

The birds on the ground are the — Thrush; King Fisher; Robins; Golden Oriole (this bird, though not gifted with much song keeps its nest in beautiful order); Curlew (a Scotch bird with a mournful cry, likened by the Scotch natives to the cry of a lost soul);
Sparrows; Pigeons (offered in the Temple after a birth, according to the law of Moses:—“A pair of turtle doves or two young pigeons.”); Crossbill (said to have tried to peck the nails out of the hands of Our Lord, as He hung on the Cross: thus, the crossed bill, and thus the bird's colour (red) from the Precious Blood which flowed over him); Nightingale. Some of the Birds at the Feet of Our Lady

The Panels Left and Right of the Centre 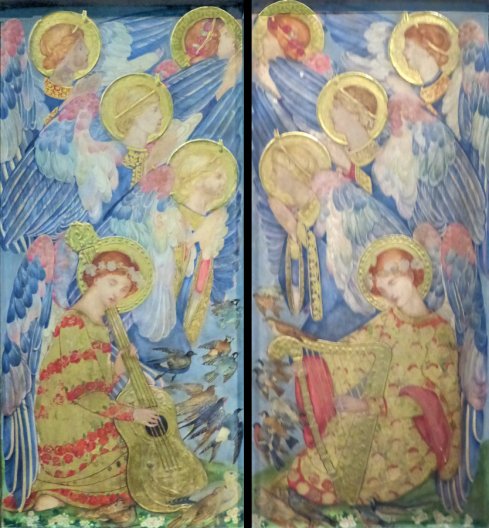 The central panel of  Mary and the Infant Jesus is flanked by a pair of panels depicting adoring angels. Here is Kate's own description of the left-hand panel:

Four Adoring Angels and one Praising Angel, crowned with red roses — the virgin flower <something is wrong with the text as printed in the magazine here, as the angel is crowned with white roses; it is the angel's gown that is adorned with red roses>, singing and playing a musical instrument. In this picture are English singing birds and others, praising and flying towards the central group, and birds on the ground all praising. The flying birds are (from above, downwards) — The Coal Tit; The Crested Tit; The Blue Tit; The Great Tit; The Stormy Petrel, so called after St. Peter (stormy Peter) who walked on the water. This bird rushes along the surface of the water in stormy weather; The Martin; The Swift; The Swallow.

The birds on the ground are — The Small Gull; The Hedge Sparrow; The Missal Thrush <sic>.

And the right-hand panel:

Four Adoring Angels and one Praising Angel singing and playing the harp, crowned with white roses (the Virgin's flower). <And this angel's gown has white roses.>

The birds in flight include the — Gold-crest (the smallest English singing bird); Yellow Hammer; Bullfinch.

The birds on the ground are the — Nightjar (or fern-owl); Nuthatch; Starling; Water Wagtail. 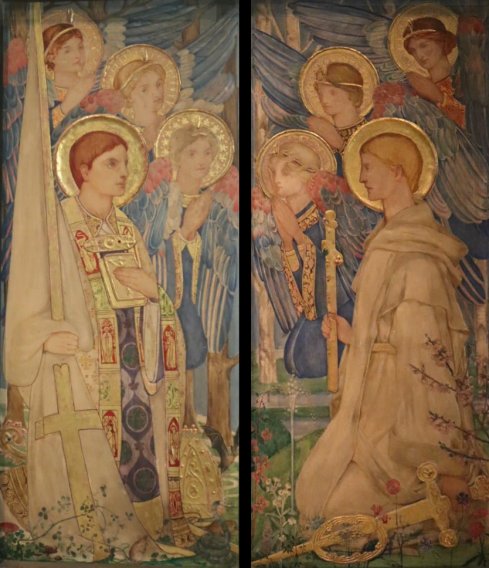 The outer, hinged panels can be closed so that only the central panel can be seen - as is done now during Advent and Lent. They depict on the left St Patrick and on the right St Alban, the patron saints of the two parishes founded through the efforts of the brothers James and Tom Pollock — since united in the present parish of St Alban and St Patrick. Here are the descriptions that Kate Bunce provided for each panel:

He was an Irish Saint — Represented in the picture as a youth, but wearing the vestments that distinguished him later. The Crozier and Mitre on the ground show that he was a Bishop.The Banner that he was a Missionary Saint.

He is supposed to have driven the vermin out of Ireland. In the picture are the — Snake; Toad; Mouse; Lizard; Newt; Bat; Toadstool, which is a poisonous growth.

Some of the Saints that ornament St. Patrick's Cope are Irish — St. Bridget; St. Colomb. The ornamental patterns are based on the Shamrock, and on the Cope is a Celtic Cross.

The clover is Calvary Clover. The red stain on the leaf is supposed to be the Blood of our Lord, which fell there because the clover grew beneath the Cross. The spiky seed-pod pulls out, when dry, into a perfect crown of thorns. There is snow on the ground, because St. Patrick went through storm and cold while on his missionary work. The bare trees show that he bore the hardships of the winter. The Shamrock is dedicated to St. Patrick. St. Patrick used the shamrock as an emblem of the Holy Trinity. When he landed in Ireland in A.D. 433, the people would not be convinced and were ready to stone him. He said to them: “Is it not as possible for The Father, The Son, and The Holy Ghost, as for these leaves, to grow upon a single stalk?” Then the people were immediately convinced.

A Roman soldier converted to Christianity by a wandering missionary monk. Changing his soldiers’ dress for the monk's habit, he enables the monk to escape. Only eight hours a Christian, St. Alban is slain at Verulam (St. Alban's), on a flowery hill by the side of a stream. Being thirsty just before his beheading, a little cavity appears in the ground, out of which springs a fountain.

He is seen wearing the habit of the monk, and carrying the sword with which he was beheaded. A blossoming Palm of Victory lies near him in the shape of a victors crown; close by, the Poppy, emblematic of the quiet sleep of death, and the everlasting flower typical of eternal life; Veronica for faith, and, over all, the Cross, the symbol of a never-dying Faith. 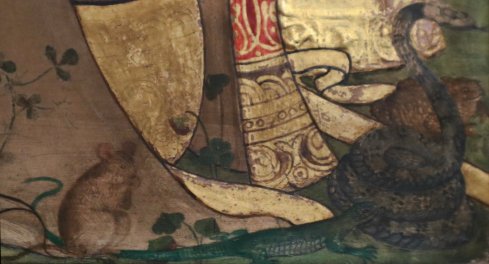 Some of the "Vermin" at the Feet of St Patrick

Here is Kate's description of the frame made by Myra:

The border of the Frame is based on the Shamrock, the emblem of the Holy Trinity.

On each side of the central panel are :— The Lamb; The Pelican; The Phoenix; The Fish — Emblems of the Saviour.

The remaining medallions are taken from the Benedicite Omnia Opera:— “ O, all ye green things upon the earth; O ye sun and moon; ye stars of heaven; the earth; mountains and hills; seas and floods; whales; frost and cold; ice and snow; spirits and souls of the righteous; Ananias, Azarias, and Misael, etc.”

A Selection of the "Benedicite" Medallions

The History of the Reredos

The reredos was promised by the sisters Kate and Myra in 1909 as a gift in memory of their father John Thackery Bunce (1828 – 1899) for many years the influential editor of the Birmingham Post. S. Alban's Magazine for November 1909 recorded: “Reredos for S. Patrick’s Chapel to be given painted and made by the Misses Bunce in memory of their father. (Probably ready next Summer.)”

However, it was not ready for nearly a decade. The central panel was shown at an exhibition in 1913 but the completed work was not delivered until 1919, now destined not for St Patrick's Chapel but for the Lady Chapel on the other side of the church. In  S. Alban’s Magazine for June 1919 Francis Underhill (Vicar 1911-1923) wrote: “An exceedingly beautiful Reredos is being given us for the Lady Altar, and will be in place, I hope, by the time of the festival. It represents Our Lord and His Mother, with attendant angels, and S. Alban and S. Patrick, and has been painted and given by Miss Kate Bunce. The picture has taken many years of patient work, and is quite exceptionally fine. It is full of symbolism, which will be explained in a printed paper which Miss Bunce is preparing. She is giving the painting in memory of her father, Mr. Thackery Bunce (so well known in Birmingham), and her mother and sisters. Notice will be given of the day and time of the Dedication.” Since 1909 there had been two changes of vicar, so Francis Underhill may not have known of the original offer.

The Reredos in the Lady Chapel, before 1926

(The altar in the Lady Chapel had originally stood in an Iron Chapel dedicated to St Katharine next to the church, and her emblem was still prominent at the time of the phorograph.)

Myra Bunce died in 1918, before the reredos was installed, and a copper plaque on the rear of the right-hand leaf declares that the work is in memory of Myra herself as well as their parents John Thackery Bunce and Rebecca Ann (née Cheesewright) and their sister Edith Ann Bunce. 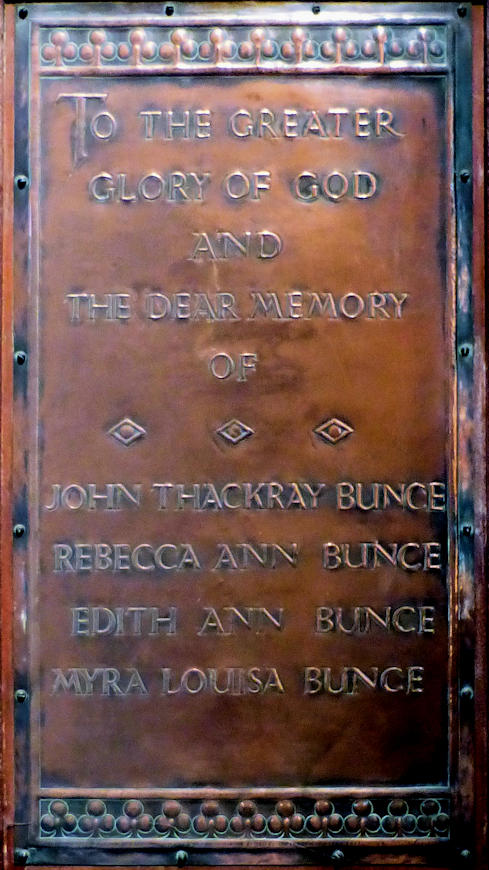 This plaque must have been completed by or on behalf of Kate, but two small plaques beneath make it clear that while Kate painted (pinxit) the panels Myra beat or hammered out (excudit) the frame. 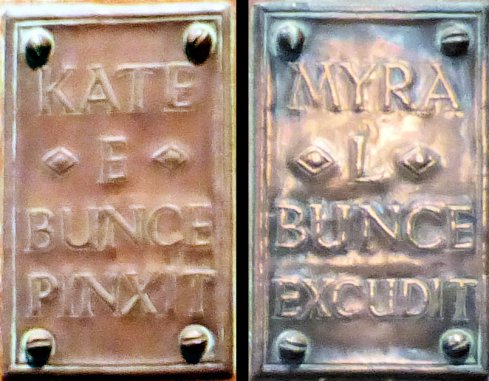 We believe that the Reredos was most likely moved to St Patrick's Chapel (at that time designated the Blessed Sacrament Chapel) in 1938 when the copper panel beneath the reredos, clearly designed as a matching support, was commissioned from the Birmingham firm of A.E. Jones together with the tabernacle in front of it on the altar.

Another Bunce Reredos at Longworth

Before promissing a reredos for St Alban's Church, the sisters had already, in 1904, given a reredos in memory of their parents to St Mary’s church at Longworth in Oxfordshire, a village with which the Bunce family had been associated for several centuries. Kate painted three tempera panels depicting the Nativity, the Crucifxion and the Deposition from the Cross, which are set in a beaten silver frame made by Myra. In this case the only birds are a single pair of doves, but many more different plants are depicted. As at St Alban's, the frame is embellished with roundels depicting the emblems of the four evangelists — Human Figure, Lion, Bull, and Eagle — and the same four symbols of Christ — Lamb, Pelican, Phoenix and Fish.

In 2017 a Birmingham Civic Society Blue Plaque commemorating Kate Bunce was fixed to the tower by the Conybere Street entrance of the church. Assumption of the Blessed Virgin ...