When the church opened in 1881 the interior was very bare and there were no statues of the saints.

Our oldest statue is that of the Blessed Virgin Mary holding the infant Jesus, which stands by the entrance to the the Lady Chapel in the North Transept. 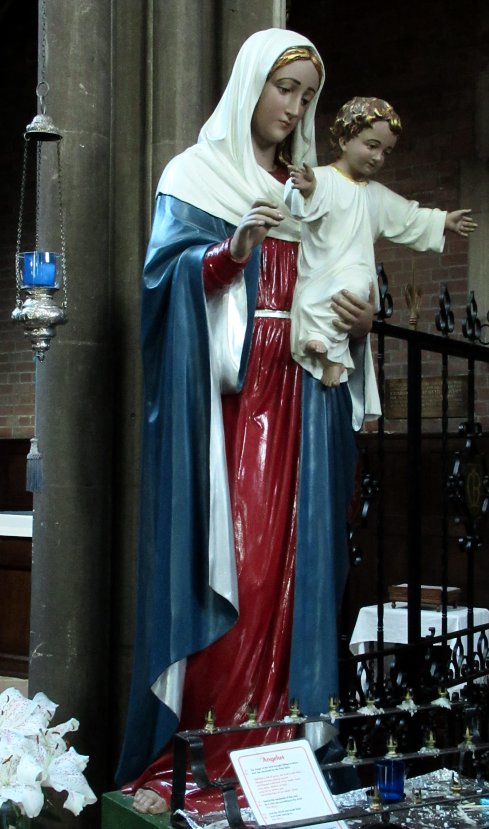 At present we do not know the exact year in which he gave it, but it is to be seen in a photograph taken no later than December 1912, as it was used on the cover of S. Alban's Magazine from January 1913. It was probably 1911 or 1912, as the introduction of crib figures at Christmas 1910 caused controversy with some of the congregation at first opposing the use of images in the church – a controversy that would already have played out if the statue had been introduced any earlier than 1911.

The statue was paid for from the proceeds of a dancing class Fr Rosenthal ran for the young people of the parish, charging 2d a night (two old pence – less than 1p – but with a purchasing power in 1913 near to that of £1 in 2020).

Supplied by the Art and Book Company of Westminster, the staue is carved in oak. It has been repainted several times, Mary's cloak acquiring 12 stars and a moon in 1957, but losing them again in 2009.

Before repainting with stars... 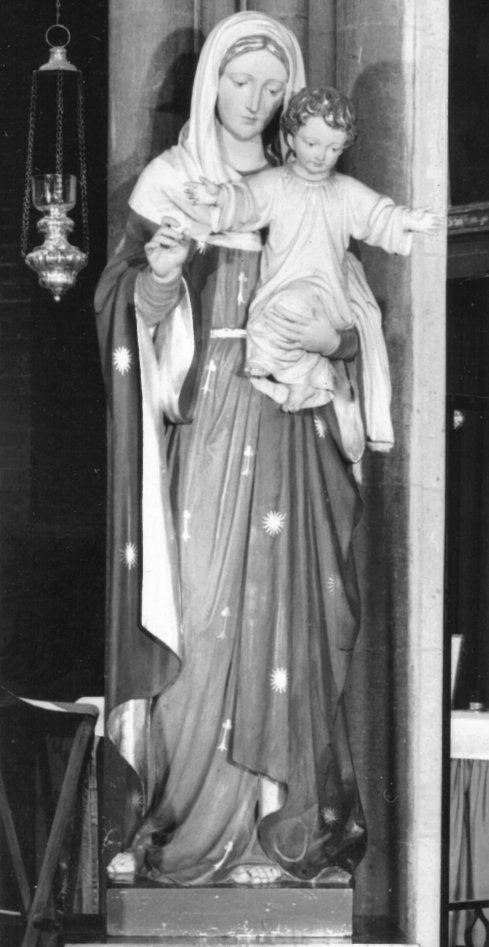 Our next statue is that of St Alban. 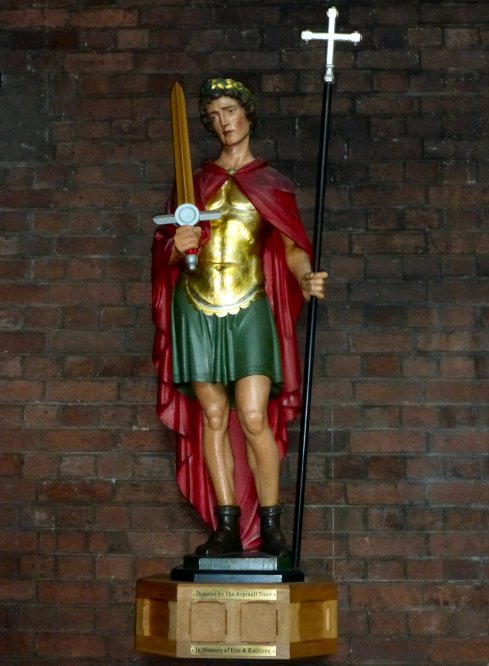 This statue was promised in July 1916 by Laura Caroline Bailey and placed in the church in February 1917. Like the statue of our Lady, this statue is of painted carved oak and was supplied by the Art and Book Company of Westminster.

The light oak bracket on which it now stands in the east corner of the south transept bears the slightly misleading inscription "Donated by The Aspinall Trust in Memory or Eric and Kathleen". This refers to the bracket itself, provided in 2003. A small plaque, currently detached from the statue, bears the inscription "To the Glory of God This Statue was given by L. C. Bailey as a Thank-offering, for 12 Years of Catholic Privilege, in St. Alban's Church."

This statue has stood in different places in the church – first at the east end of the south aisle and then at the south side of the chancel arch – before its present home in the south transept beside St Alban's Altar. 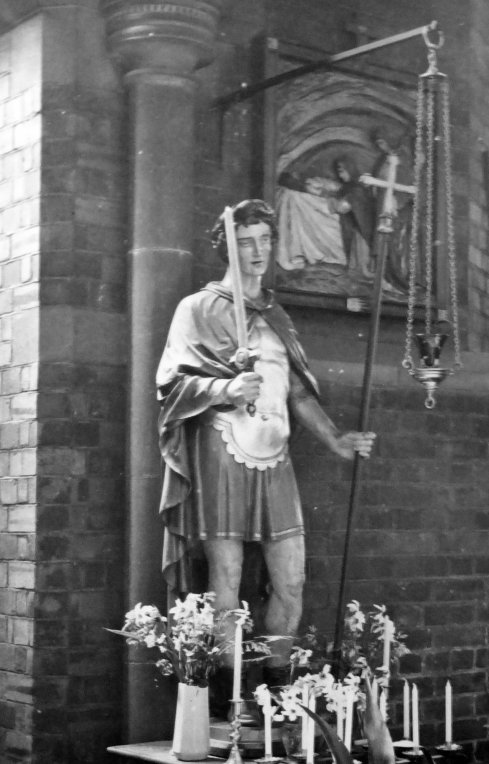 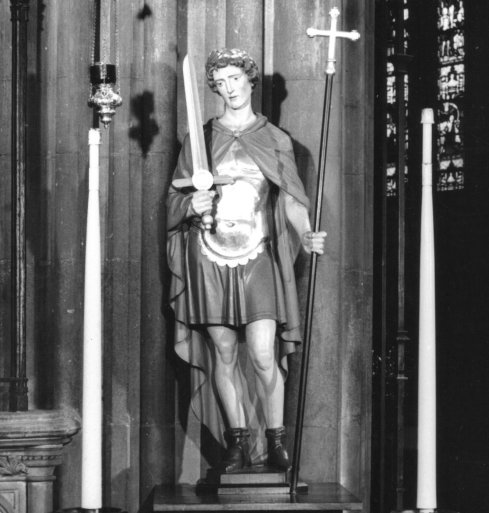 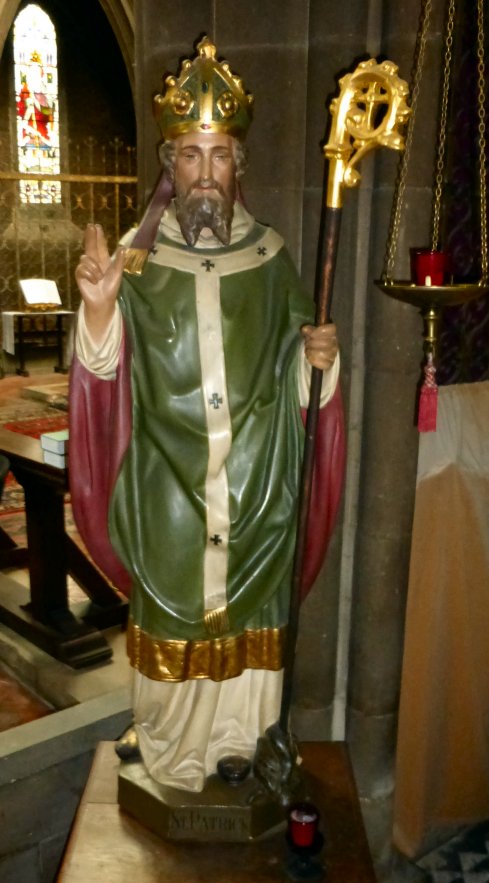 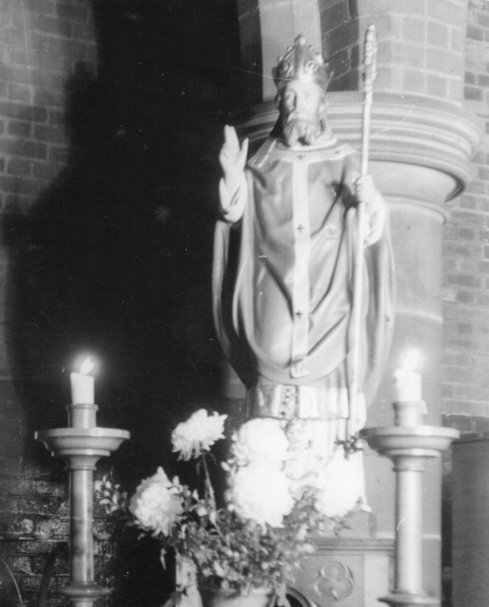 The statue of St Patrick in St Patrick's Frank Street

When St Partick's closed in 1964, the statue was transferred to St Patrick's School on Highgate Street and when the school closed the statue was placed in this church.

The statue dates to 1921 and was given by the children of "The Greater Catechism" who raised funds over several years. We do not know who made it.

The large Crucifix in the west porch came from the Church of St Mary, Aston Brook. When St Mary's was demolished in 1972 during redevelopment around the Aston Expressway the crucifix was rescued and installed here.

In its forlorn, unrestored state showing the scars of vandalism it stands both as a witness to its own sad history and as an image of the hurt of the world. 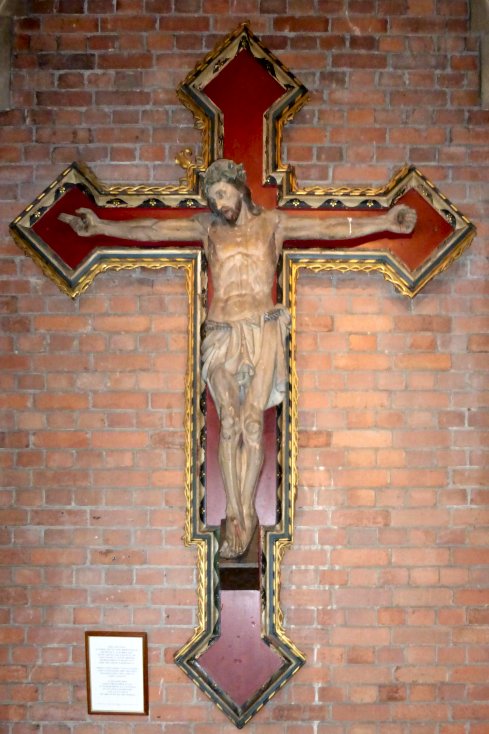 In St Mary's the crucifix was suspended in the chancel arch. 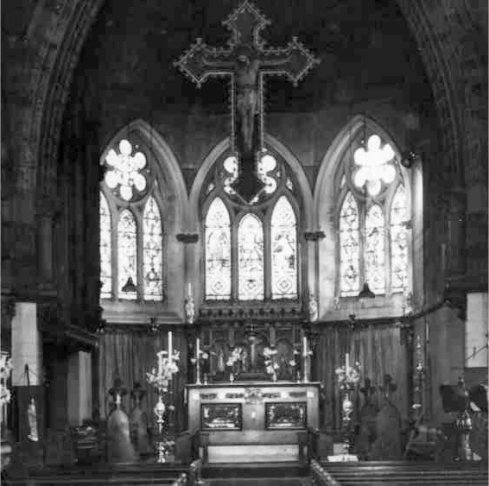 The Calvery statues on the Rood Beam 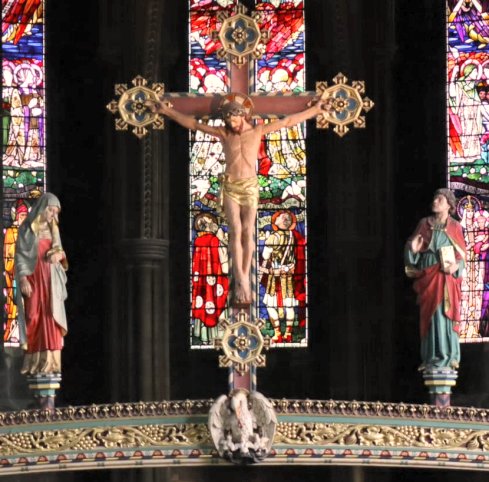 The Rood Beam with its Clavery - a Crucifix flanked by images of the Virgin Mary and St John - was made for St Patrick's Church in Frank Street. It was designed by Frank Pearson, son of J.L. Pearson, and carved by the London sculptor Nathaniel Hitch in 1913. It was the gift of Fr Lopez, then an assistant priest at St Patrick’s, in memory of his mother. It was removed before the demolition of St Patrick’s and re-erected in St Alban’s under the supervision of Romilly Craze in 1967 in memory of Canon Belton, Vicar of St Patrick's from 1913 to 1945. 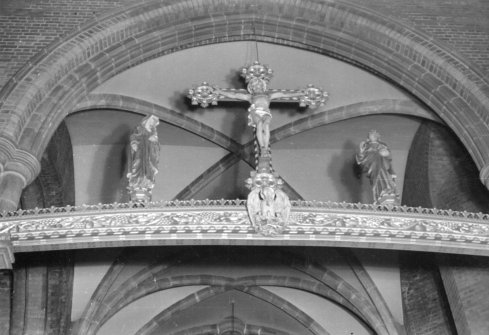 The installation of the Rood Beam in St Alban's was perhaps the most significant change in the appearance of the interior since the installation of the chancel screen in 1897, and continues to divide opinion between those who see it as an intrusion marring the clean vista from the west end of the church to the apse and those to whom a rood beam is a traditional fixture whose very purpose is to draw the attention of the viewer to the crucifixion.

Our small statue of Our Lady of Walsingam now sits in a purpose-made shrine in the south aisle. 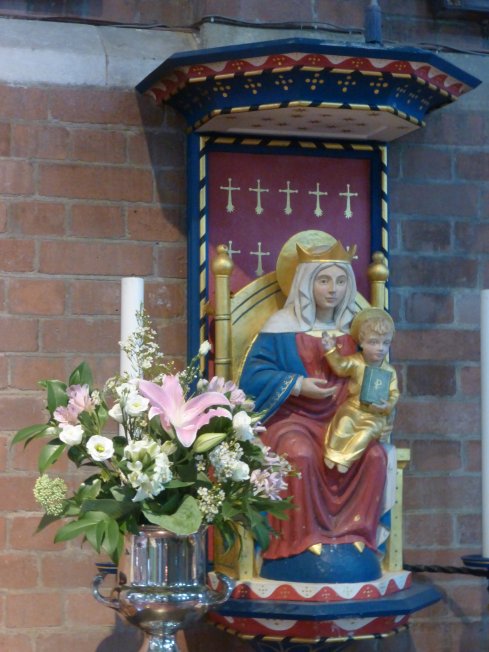 The shrine was designed by John Bucknall of the John Osborne Partnership in the style of Sir Ninian Cooper and consecrated on 20th May 1984 in the presence of Bishop Kallistos of Diokleia. Previously this statue stood in the east corner of the south transept (near to the present position of the statue of St Alban. 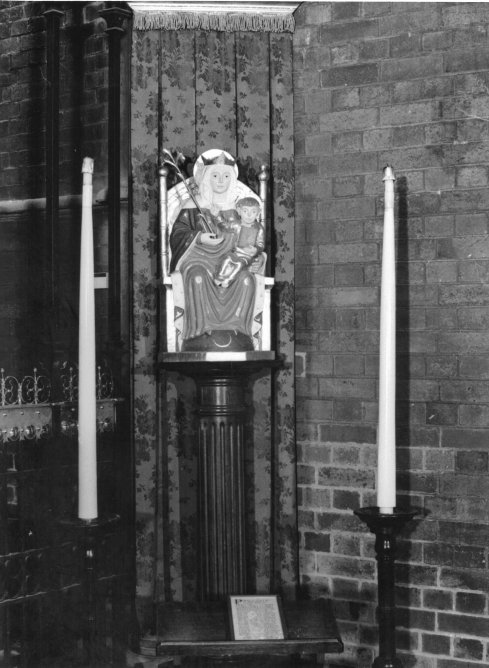 We do not know the date at which this statue was acquired, or who gave it, but it first appears as a manuscript addition to a typed inventory dated 1957.

A small statue of St Joseph stands in the north aisle on a portable altar. 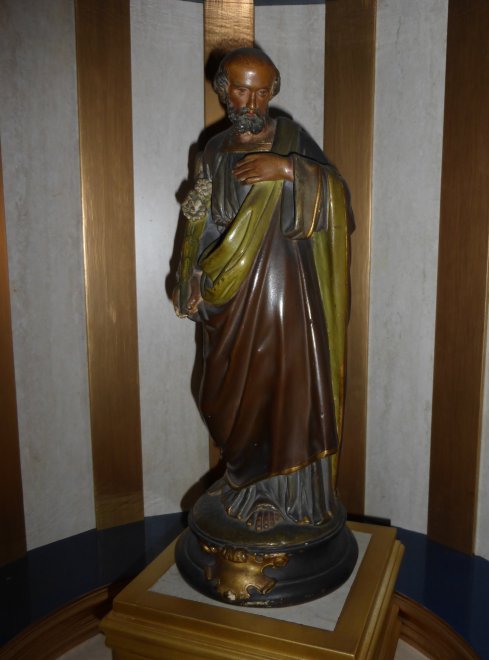 The church inventory records "Formerly belonged to Sister Hales", but at present we have no more information. The minature baldacchino within which the statue stands was made by John Wainwright, a former member of the congregation.

A small plaster statue of St George Patron of England today stands in a niche in the cloister entrance lobby.

St George has on his shield the three lions passant guardant of the Royal Arms of England instead of the red cross more often associated with this saint, which he carries as a pennon on his lance.

Our church inventory records that this statue was given by F Kyte in memory of A Hill, at some point after 1923 and before 1957, but not exactly when or where it was originally placed.

However, we do know that it was made by Faith Craft, the art studio of The Society of the Faith, as the same figure appears in a catalogue from the studio:

The statue may have been associated with a parish Guild of St George. However, meetings of this society for the men of the congregation, which we know functioned from the 1880s to the 1900s, ceased to appear in our parish magazine by 1910, which is too early for the statue.

A small plaster statue of St Michael the Archangel stands in a niche in the cloister entrance lobby opposite that of St George. 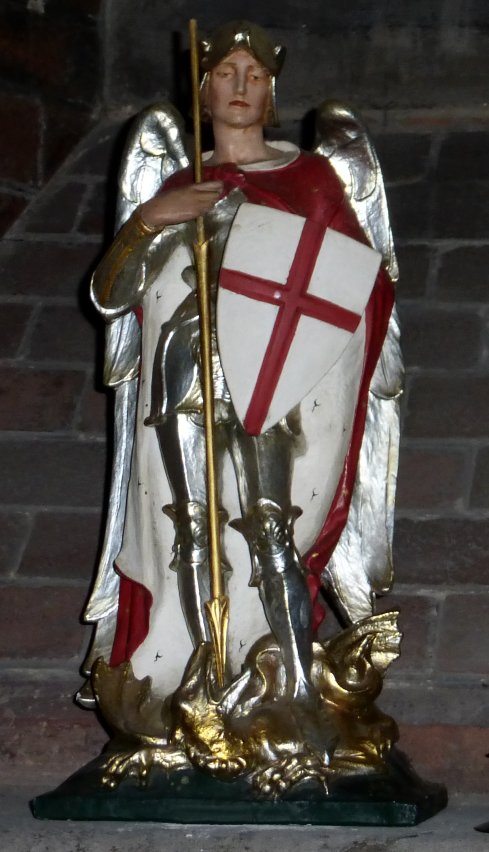 This small plaster statue of St Michael once stood in a small chapel in the west porch (or narthex) dedicate to the Archangel. For many years the south porch was used as the main entrance to the church, and in 1907 the west porch was converted into a mortuary chapel for coffins to rest in overnight before funerals and at other times for use by the Guild of All Souls to pray for the departed. In November 1940 (the second winter of World War II), it was decided that weekday services would be in this chapel, with an electric heater, allowing the rest of the church to be heated only at weekends, to save coke, which was rationed in war time. In November 1942 Fr Clark wrote: “I think it is about time that we gave a name to this chapel; seeing that it is used from time to time as a mortuary chapel I suggest it might be placed under the patronage of S. Michael, who is the guardian of the Holy Souls.”  This led immediately to the donation by G.M. Clarke of this statue of St Michael, which was placed on a bracket over the altar. We do not know who made the statue (the extant catalogue from Faith Craft includes two other figures of St Michael, but not this one).