Our large crib and its figures (except for the three kings) date from 1937, were supplied by Faith Craft, the art studio of The Society of the Faith and were desined by Ian Howgate.

Our Crib has a width of about 2 m, a depth of 1.4 m and a sloping roof with a height at the front of about 1.25 m rising to 1.65 m above the base board at the rear. Extra pieces are inserted to convert it from the Christmas stable scene to a house for Epiphany. 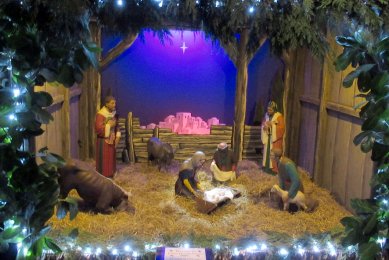 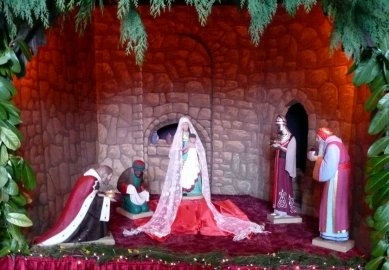 
The Figures used at Christmas 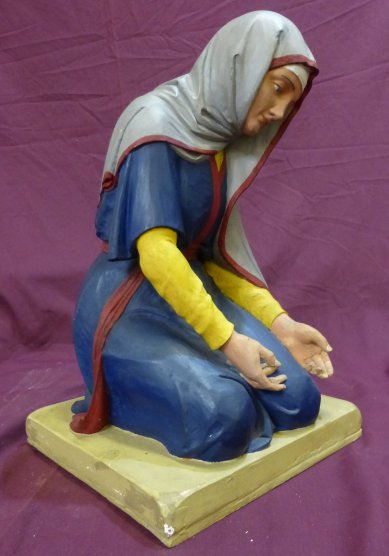 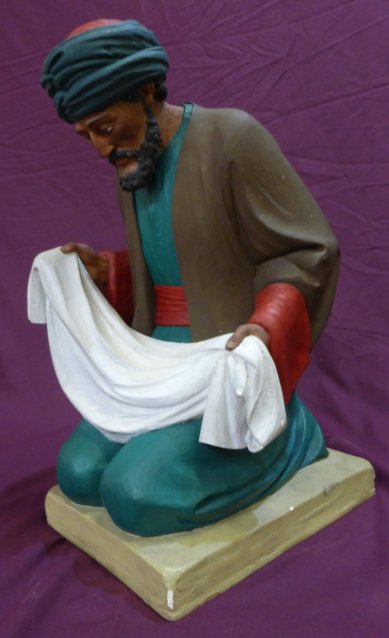 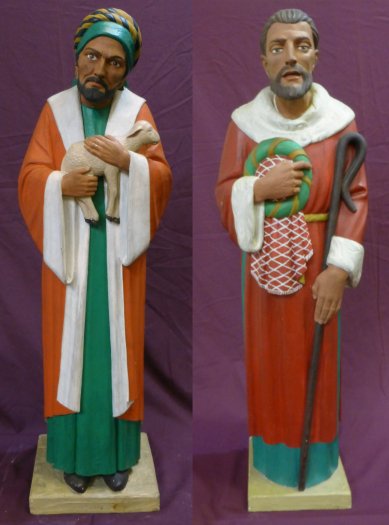 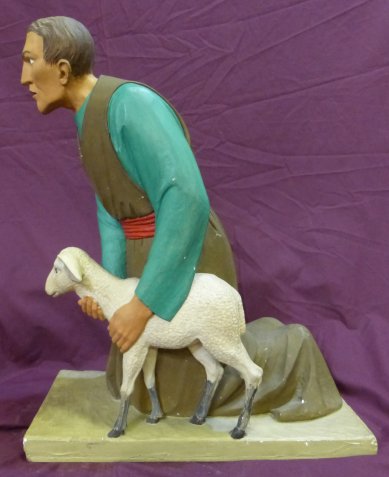 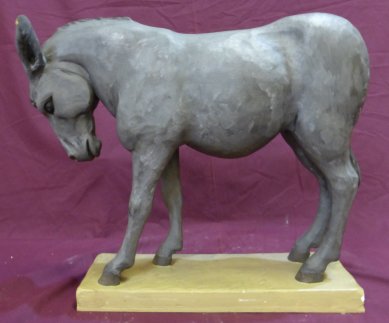 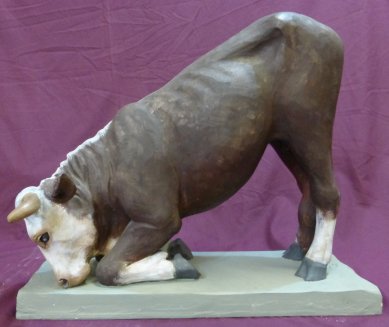 
The Figures used at Epiphany 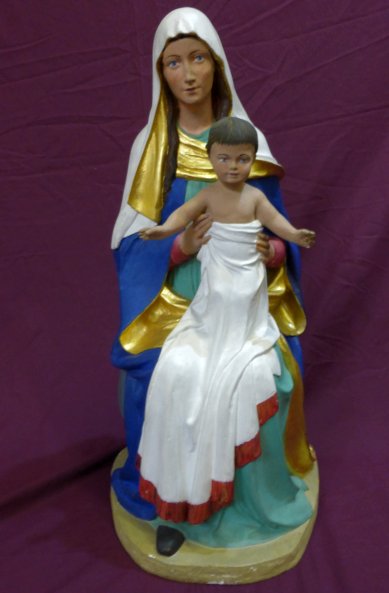 Although described in the Bible as Magi or Wise Men, our figures are definitely the three Kings of tradition and the theme of the manifestation of Christ to the Gentiles at Epiphany has been expanded by making the three figures symbolic representatives from the continents of Asia, Africa and Europe. They date from 1943 and we suspect that they too were supplied by Faith Craft, although we have no definitive evidence. 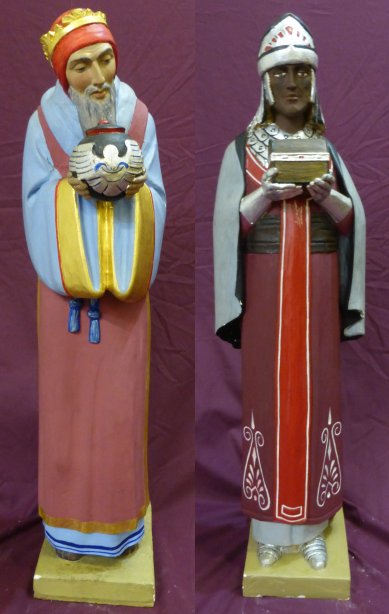 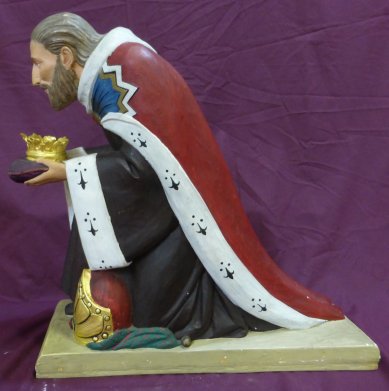 We also reuse the kneeling figure of Joseph from Christmas in our Epiphany scene.

The History of Our Crib

A Crib Set was first introduced at St Alban's Church by Mark Napier Trollope at Christmas 1910. However, two days before Christmas 1936 the crib was set alight and the frame burnt and on the afternoon of Christmas Day it was again set in on fire and completely destroyed with the figures (except for the three Magi who were still in storage awaiting Epiphany). Two more acts of arson followed, in which the curatains of the children's corner and then a pile of hymn books were set alight, before a nine year old boy was caught and placed on probation for a year.

The insurance claim on the fire damage paid for a new crib and figures from Faith Craft, the art studio of The Society of the Faith. Fr Dudley Clark wrote in the February 1938 edition of S. Alban's Magazine: “So far as I can judge almost everybody who saw the new crib approved of it, both the crib and figures were designed by Ian Howgate and were the work of the Faith Craft-Works, with the exception of the three kings which belonged to our old set, they escaped the disastrous fire of last year. The cost exceeded the amount paid by the Insurance Company by five pence. Mr. Philips took some photographs of the House of the Epiphany which can be obtained from him.” A letter from Fr Clark to Miss Dewes, a former teacher at St Alban's School, dated 14 January 1938 gives more detail: "I am sending you a photograph of our crib as it appeared at Epiphany, I have not got the photograph of it as it was at Christmas yet, the inside walls slip in at Epiphany to make the stable into a house, it was really very effective and I began to think that the small boy who burnt the crib last year did us a good service, because the money from the insurance company provided the new one and the new figures, except the three kings which belonged to the old set."

In the January 1944 edition of S. Alban's Magazine Fr Clark wrote: “Three new figures will appear in our crib at Epiphany. When our old crib was burnt a few years ago, it was replaced with a new one, but since the kings escaped the fire we have still used them, although their size was out of proportion to their surroundings. Now we have been given three new figures which match the other figures.” We do not know for certain whether these figures also came from Faith Craft, but suspect that they did as their construction and style is similar.

The top of the base of the Ox is marked FAITHCRAFT:

The Donkey, the Kneeling Mary and the Seated Mary holding Jesus have the same mark on one endge of the base.

The base of the infant Jesus shows the letters AITH, with the same form of the letter A, curved at the left, as on the Ox but perhaps a cruciform T. 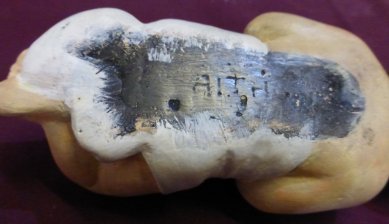 Apart from the infant Jesus all the figures have a plywood base with a central hole matching the hole in the bottom of the hollow plaster casting and show no makers marks on the bottom. (For no clear reason the figure of the king representing Africa has the same plywood base with a hole, but is of solid plaster and much heavier than the other figures.) The plaster outside the plywood is very thin on the sides of the bases and it is possible that the FAITHCRAFT mark has been covered over with fresh plaster during repairs to the bases of some figures, as the partially effaced mark on the base of the seated figure of Mary shows: