(This page is still under development.) 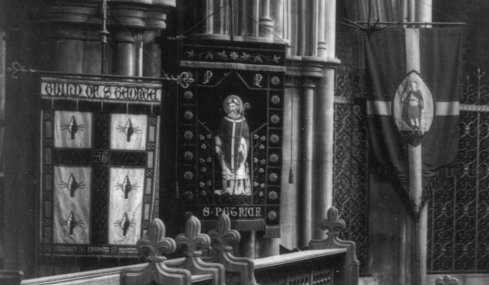 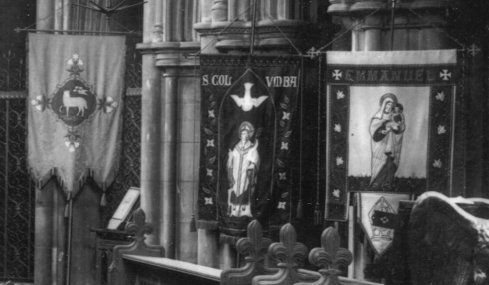 The Banner of St Alban

We believe that the the central 'mandorla' or almond-shaped panel with the figure of St Alban was part of a banner made for the opening of the first temporary Mission Church of St Alban on Leopold Street in 1865.

The description by a reporter who attended the church on its first Sunday, 17th September 1865, included "a large flag, which had upon it the figure of St. Alban" (The Birmingham Daily Post 18 September 1865).

We can see part of that that "large flag" on the right of a photograph showing the temporary church decorated for harvest in 1867: 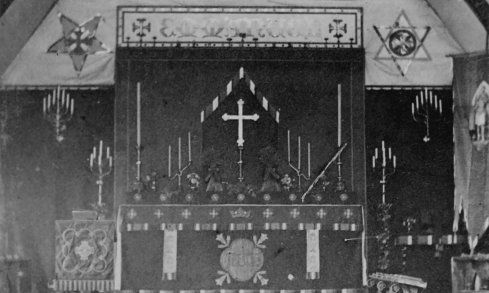 And more clearly in the sanctuary of the present Church around 1895 and 1905: 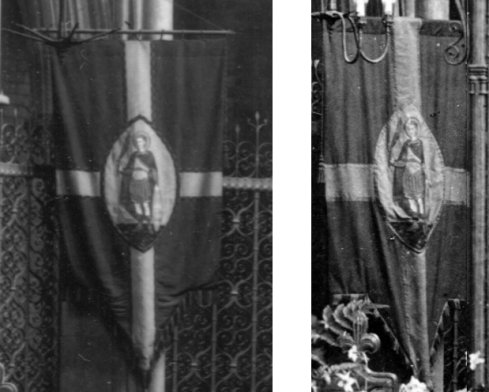 The polluted air of Birmingham was not kind to fabrics and between the two pictures above the silk of the background part of the banner had been renewed. According S. Alban’s Magazine for July 1899 : “St. Alban’s Banner has been re-mounted, the silk and other materials being given by the girls attending the Sunday Afternoon Bible Classes.” Although the design is broadly the same, the renewed banner has a wider cross and is suspended from the cross-piece in a different way.

The banner looks the same in a street procession in the 1910s: 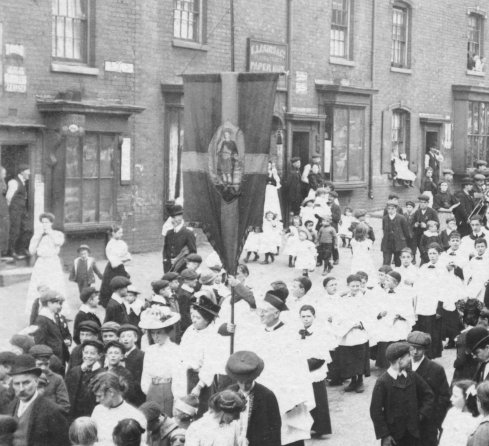 But in 1913 it needed to be renewed again: “We have all noticed with sorrow that our dear old Banner of S. Alban, has long been almost dropping to pieces. Happily the figure itself is the best part, and with some cleaning and small repairs, will last for many years longer. So Mrs. Hefford has kindly undertaken to mount it on a new piece of silk for S. Alban’s Day. We had feared that it was gone altogether beyond repair; but we are heartily glad that we shall have our old S. Alban back in renewed beauty.” (S. Alban’s Magazine, June 1913.)

Little detail is visible in this picture of the banner in the procession in 1915, but the design of the banner seems the same as before. 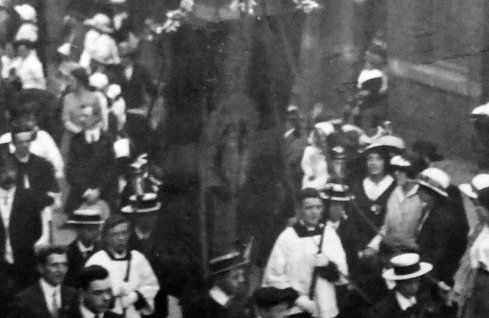 The Banner was renovated again in 1926. S. Alban’s Magazine August 1926: “We are most grateful to Mrs. Hefford for renovating the S. Alban’s Banner. Nobody seems to know how many years it has been in existence, it appears in a photograph, taken in 1890, but I believe it is a good deal older than that, the banner has been partly remade and repaired from time to time, but it is still the same, but I cannot say how long it will be before the figure in the centre proves to be past repair.”

By 1956, the figure of St Alban had been remounted on the much smaller banner that we have today: 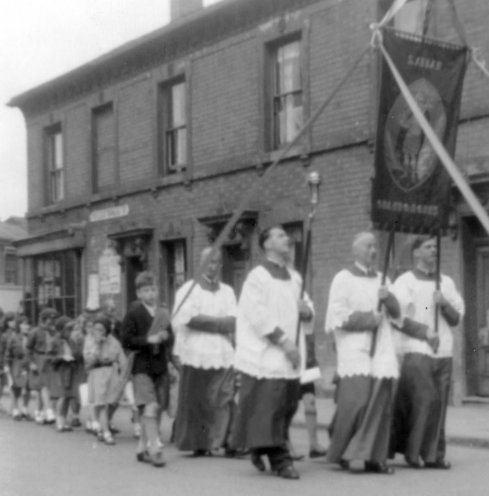 St Alban is portrayed as a Roman soldier holding a martyr's palm in his right hand and resting his left hand on a shield.

The Banner of St Patrick

This banner came from St Patrick's Church on Frank Street.

The Banner of Our Lady

Hangs in the Choir

Also known as the Adoremus or Ecce Agnus Dei banner, this banner used to be carried in processions of the Blessed Sacrament at Corpus Christi. It is now to frail to use.