Who made this window?
It is one of a pair by Stourbridge-born Sidney Meteyard RBSA, a member of the Birmingham Group, who studied under Edward R. Taylor at the Birmingham School of Art.

Who gave this window?
It was given by James Frederick Deeming, who later gave the money to complete the church tower.

Is there a dedication plaque?
There is no separate plaque, but inscriptions at the bottom of the two lights of the window, invisible from ground level read “To the Glory of God” and “The Gift of James Deeming”.

Like the Te Deum Laudamus and Venite windows, the Benedictus Dominus window is based on one of the songs of praise sung at traditional Prayer Book Morning Prayer. This is the song of Zechariah (Luke 1:68-79) and takes its name from the Latin version of its opening words, which are quoted, slightly condensed, on the scrolls in this window: “Benedictus Dominus Deus Israel; quia (visitavit et) fecit redemptionem plebis suae” – “Blessed be the Lord the God of Israel who hath (visted and) redeemed his people”. There are several reference to the words in the window, which is dedicated as a whole to the missionary efforts of the Church overseas.

At the top the trefoil contains a Chalice surrounded by a crown of thorns.

Below this are rays of light from the left, as if from the lamp in the trefoil above the central window.

The top left panel depicts an angel holding a Crucifix on which is a golden figure of the glorified Christ from which rays of light shine in all directions­—a symbol of salvation—“And hath raised up a mighty salvation for us.”

The right-hand panel depicts a second angel bearing a palm of victory, symbilising final victory over sin and death.

The middle register commemorates priests and deacons who went from St Alban's to missions overseas—“To give knowledge of salvation to His people".

They are represented by a dying missionary priest, supported by an angel. He is looking towards another angel bearing a torch—"To give light to them that sit in darkness and in the shadow of death". This angel’s robe is patterned with formal peacock feathers to symbolise eternal life. In the background are children converted from heathenism, representing the young faith, while a kneeling woman in eastern robes front of the priest represents those yet to be converted.

Gerard Trower, once a curate under the Pollocks, who left St Alban's in 1893, later became Bishop of Likoma in Central Africa. In 1906 he returned to St Alban's church to ordain a member of the congregation as a deacon to serve in his diocese.

In 1916 Arthur Cyprian Beale left his curacy at St Alban's to serve as an army chaplain in the recently captured German colony of South-West Africa, with the express hope of working in the mission field when the war ended. However, he died there on All Saints’ Day 1918, a victim of the influenza pandemic of 1918-1919. Could the figure of the dying priest be modelled on Fr Beale?

In the bottom register, on the left the Blessed Virgin Mary holds the infant Jesus—“He hath visited and redeemed His people”.

Whether or not the dying priest is a portrait of Fr Beale, we know for sure that the bishop shown in the bottom right is Bishop Mark Napier Trollope, as he was identified in the description of the window at the time when it was installed. After only a year as vicar of St Alban's, he left at the request of the Archbishoop of Canterbury in 1911 to become "Bishop in Corea" (now Korea), where he had previously served as a mission priest for ten years.

The bishop holds in one hand his pastoral staff, of silver and ebony, with a figure of St Nicholas, the patron saint of sailors, in the crook. This was the gift of St Alban's congregation to their former vicar. In his other hand he holds the image of a fig tree in fruit to symbolise the growth of the spiritual seed sown by him and others in Korea. Behind his head is shown Seoul Cathedral, which was being built under his direction, to the design of Arthur Stansfield Dixon (churchwarden of this church from 1899 to 1907 and our church architect from 1907 to 1914). 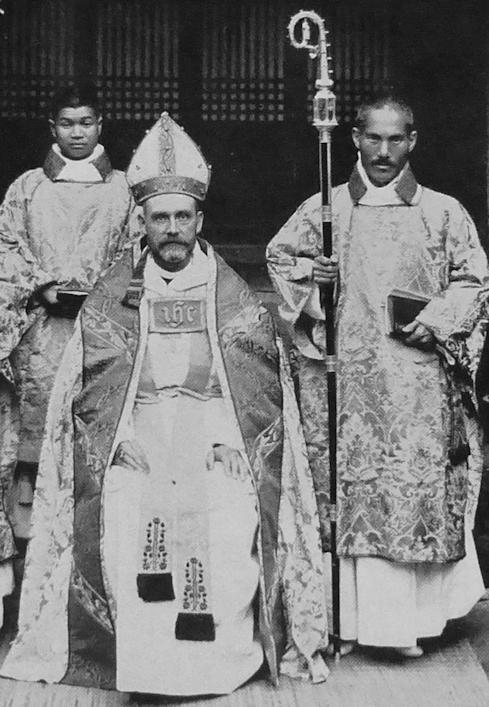 Bishop Trollope in 1914 with Korean clergy

In the background is a fruitful vine, but the bishop stands among rough strong thorns, symbolising the difficulties and trials to be surmounted.

Here is the full text of the Benedictus Dominus from the Book of Common Prayer:

Blessed be the Lord God of Israel : for he hath visited, and redeemed his people;
And hath raised up a mighty salvation for us : in the house of his servant David;
As he spake by the mouth of his holy Prophets : which have been since the world began;
That we should be saved from our enemies : and from the hands of all that hate us;
To perform the mercy promised to our forefathers : and to remember his holy Covenant;
To perform the oath which he sware to our forefather Abraham : that he would give us;
That we being delivered out of the hands of our enemies : might serve him without fear;
In holiness and righteousness before him : all the days of our life.
And thou, Child, shalt be called the Prophet of the Highest : for thou shalt go before the face of the Lord to prepare his ways;
To give knowledge of salvation unto his people : for the remission of their sins,
Through the tender mercy of our God : whereby the day-spring from on high hath visited us;
To give light to them that sit in darkness, and in the shadow of death : and to guide our feet into the way of peace.

(The Benedictus that forms part of musical settings for the Mass is quite different; it just begins with the same Latin word and comes from the words of the crowd as Jesus entered Jerusalem on Palm Sunday: "Benedictus qui venit in nomine Domini" – "Blessed is He who comes in the name of the Lord"; Mark 11:9.)

Compare this window to the left-hand Venite Window, also by Sidney Meteyard, and the earlier central Te Deum Window by Henry Payne.