What date is this window?
It was installed in 1904.

Henry Payne's signature is found in the bottom right-hand corner of the right panel of the window.

We believe that alterations were made to this window in 1927 by Sidney Meteyard when the flanking windows were added.

Who gave this window?
Howard Taylor Ratcliff, a strong supporter of St Alban's Mission from early days, gave it in memory of  our first priests, James and Thomas Pollock.

Is there a dedication plaque?
There is no plaque to be seen now, but a according to a card distributed when the window was dedicated in 1904, there was a brass plaque beneath the window inscribed: “Glory to God. In blessed memory of the founders of this church, the Rev. James Samuel Pollock, entered into rest December 22nd, 1895, and the Rev, Thomas Benson Pollock, entered into rest December 15th, 1896. This window was presented by Howard Taylor Ratcliff, many years their churchwarden.”

The window is based on the Te Deum Laudamus, a song of praise to God sung in English as part of traditional Prayer Book Morning Prayer, which takes its name from the opening words "We praise thee, O God" in the Latin original written in 387 A.D. The first part lists all the categories of beings who praise God, including "the noble army of martyrs", making it a suitable theme for a window in a church dedicated to the martyr St Alban:

"We praise thee, O God; we acknowledge thee to be the Lord.
All the earth doth worship thee, the Father everlasting.
To thee all angels cry aloud, the heavens and all the powers therein.
To thee cherubin and seraphin continually do cry,
Holy, Holy, Holy, Lord God of Sabaoth;
Heaven and earth are full of the majesty of thy glory.

The glorious company of the apostles praise thee.
The goodly fellowship of the prophets praise thee.
The noble army of martyrs praise thee.
The holy Church throughout all the world doth acknowledge thee:
the Father of an infinite majesty;
thine honourable, true and only Son;
also the Holy Ghost the Comforter."

At the top of the window a brightly shining lantern in the trefoil symbolises the Holy Spirit illuminating the Church Triumphant.

Below, at the top of the two lancets, we see the foot of God's throne (as mortals we may see no higher) as described in Revelation Chapter 4, surrounded by seven lamps "which are the seven Spirits of God" and "a sea of glass like unto crystal".

Below the sea of glass the sky is thronged with angels with scarlet wings above the heads of "the noble army of martyrs", who stand and kneel on a flowery green ground, while doves take flight from each side.

At the foot of the window stand St. Alban on the right and the priest Amphibalus on the left, to save whom he Alban suffered martyrdom. Each is identified by a label beneath his feet. Scrolls behind their heads read "Te Deum Laudamus" and "Gloria in Excelsis" - "Glory in the highest".

It was often the practice to incorporate portraits of patrons or those in whose memory a window was erected, and it is possible that the heads of Amphibalus and the kneeling figures wearing copes above Amphibalus and Alban are modeled on Thomas Pollock, James Pollock and Dr Joseph Oldknow (the vicar of Holy Trinity, Bordesley, who invited James Pollock to found St Alban's Mission in 1865). 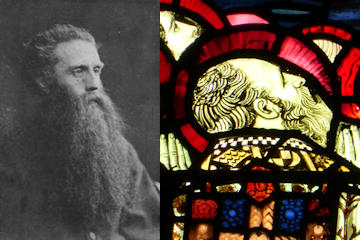 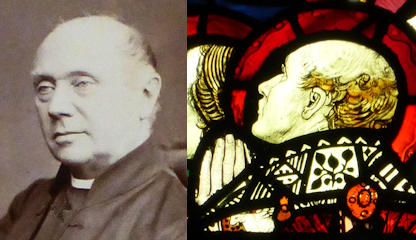 Changes to the Window

We know from the contemporary description of the new window, confirmed by a photograph from between 1904 and 1907, that the window as we see it today has been significantly altered from its original design.

A card distributed at the dedication of the window at the Patronal Festival in June 1904 says:

“The window, which is most beautifully conceived and carried out, is a Te Deum window. The intention of the artist in the central window of the sanctuary is to represent the worship of Heaven. In the lowest portion of the window stands on the right hand St. Alban, and on the- left the priest Amphibalus, by whom St. Alban was converted to Christianity; and to save the life of St. Amphibalus, St. Alban suffered martyrdom. Then there is depicted in wondrous colours the Holy Army of Martyrs, in the calm of rest and joy, some standing, some kneeling in adoration before the Throne; higher still is the sea of glass like unto crystal, and the Cherubim and Seraphim whose wings of flame circle unceasingly round the Throne, the foot of which is just descried surrounded by the seven mystic candles. Four soaring birds with wings outstretched speak of all creation praising God, and all holy thoughts and aspirations soaring and finding their satisfaction in God. Above the trefoil is a lamp emblem of the light of the Holy Ghost, illuminating the Church triumphant and fulfilling the promise that He would even abide in His Church of the earth to guide and keep it in all truth."

Today there are only two doves, and the description above does not mention the scrolls bearing the words "Te Deum Laudamus" and "Gloria in Excelsis". The comparison below of a picture taken when the window was new with its present appearance confirms that two doves have been removed and the scrolls added. It is also possible that there has been a change from clouds to sky beneath the feet of the angels. 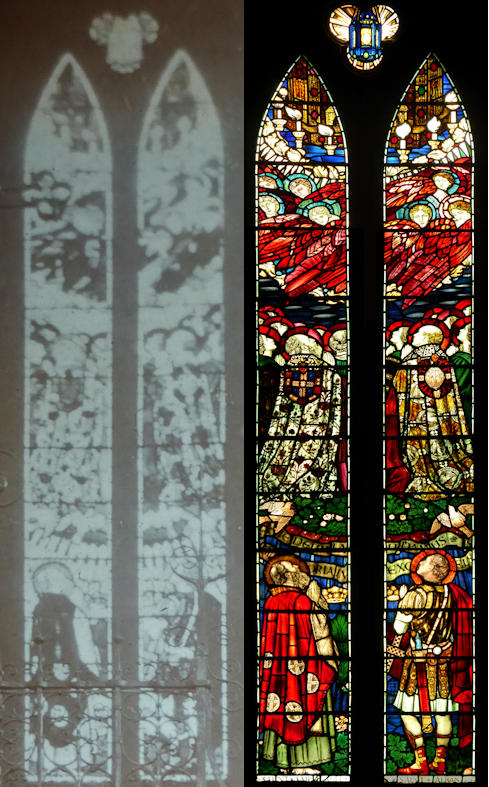 It is likely that this alteration was the work of Sidney Meteyard, another of the Birmingham Group, who was responsible for the widows added in 1927 on either side of the this central window. The removal of two doves seems arbitrary, but the addition of the scrolls serves to unify the designs of the three windows. We know that there were delays to the installation of the windows by Sidney Meteyard, originally planned for 1926 and that design changes were required by the Diocese before a Faculty (permission) was granted for their installation - could changes to the existing window have been part of this process?

Compare this widow with the work of Sindney Meteyard in the Venite window to the left and the Benedictus Dominus window to the right.

This page is part of our project "Revealing St Alban's Hidden Heritage" Supported by The National Lottery Heritage Fund.