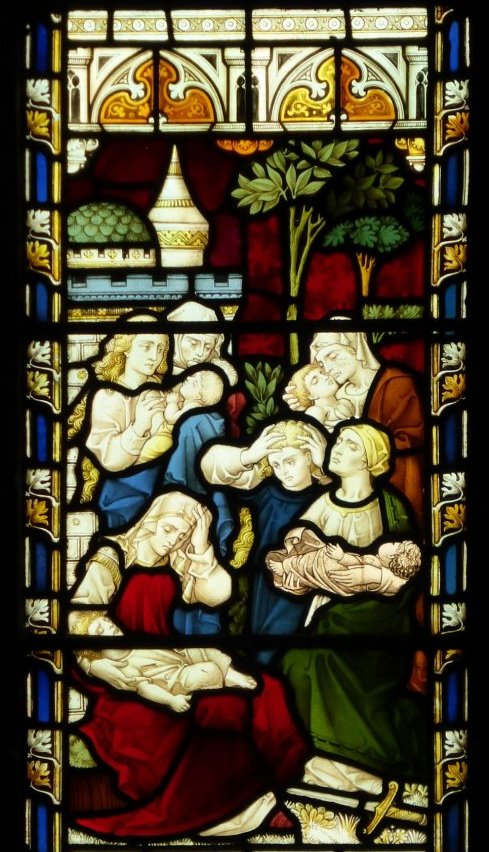 In this panel we see mothers lamenting over their dead children, who have been killed on the orders of King Herod, hoping to eliminate Jesus - the Massacre for the Holy Innocents, which is commemorated on the 28th December, both Anna's birthday and the day she died. The scene is unusual as the bodies of the dead children are held by their grieving mothers; more often the children are either shown being killed or lying dead on the ground.

The death of these innocent children also had another significance for James Pollock. Before he and Thomas were born, five of their siblings had died in quick succession from typhoid fever between October 1831 and January 1832: Mary, Jane, Catharine, Ellen and Thomas Cosby. Only Anna, William, and baby Samia were spared.

James Samuel Pollock was keenly aware of his older siblings who had died before he himself was born, and he dedicated his book, Dead and Gone: An Examination of Two False Doctrines, to them as follows:

“To my
BROTHER AND FOUR SISTERS,
who rested from their labours
before I entered into mine,
this effort to promote faith in HIM
Whom having not seen we love,
and communion with them
whose faces we see not,
or have not seen,
who live, and have not left us,
is dedicated, with a brother’s love.”

Charlotte Ratcliff (a supporter of the Pollocks commemorated by a plaque on the east wall of the Lady Chapel) recorded James Pollock's association of these siblings with the Holy Innocents in this window: Mr. Pollock had the deaths of these little sisters deeply on his mind, though it had happened before he was born, & after his sister’s death (who came & lived with them in Birmingham) when he put up the window to her memory in S. Alban’s, the subject was the murder of the Innocents; but he said “The mind & intention of it is quite different from the way in which it is usually treated. I could not bear to have them lying on the ground slain. My sister was born on the feast of the Holy Innocents so it was quite fitting that this should be the subject of the window; but I have had my little sisters all made to be joyfully going up to heaven.”

Unless you started there, now look at the panel above, in which the souls of the children are received into heaven.

Otherwise, if you have not already done so, look now at the upper left panel, in which Hannah watched Pharaoh's daughter find the infant Moses.